An abundance of Reds... 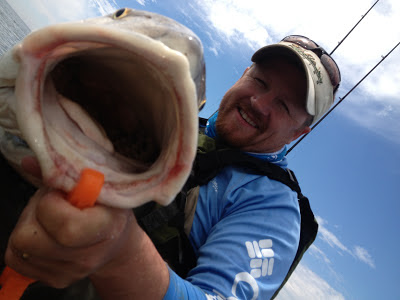 Do you know whats better than being dragged around the Chesapeake Bay by a Bull Red?.....

My day started off a little later than expected. The night before I packed my truck and was ready to hit the road by 5:00am. When I was about 25 minutes away, I realized I had forgotten my battery for the fishfinder. Those who have fished with me know that it’s one of the most important tools that I use. Turning around would take another hour away from my fishing time but I knew that I would regret it later.
With my battery in hand, I finally arrived at Ocean’s East 2 for my blue crabs and was quickly out the door and unloading my kayak at the ramp. There were only a few other boats and kayakers out before me and I took my time getting to my spot.
The winds were expected to die down a little from the last few days and I was a little excited from my last trip. My expectations for the day weren’t that high because I knew my last trip was a rare occurrence. Not too many people go out on their first trip and land 3 bull reds, so trying to duplicate that feat was considered by all - “impossible”!
It’s been said that the Chesapeake Bay fishery can down right magical! And for me, that day was today.
﻿

﻿Needless to say Kevin's plans had quickly changed and within a few minutes he landed a nice one as well.
Remember earlier when I said I had forgotten my battery. Well, now I was really happy that I turned around for it. While Kevin and I were paddling/peddling around looking for the school, my Lowrance just lit up with marks. I knew right then that we were in them. I stopped peddling and was ready to make a cast when my line gets tangled. Kevin makes a cast right in front of me and FISH ON! I made a few cast and I was Hooked Up.﻿﻿
﻿﻿
We went back and forth for the next few hours chasin' bull reds and by the end of the day I had landed 6 Virginia Bull Reds measured at 42", 44", 45", 46" and two at 47”!
﻿﻿
﻿﻿ ﻿﻿﻿ ﻿ ﻿
﻿﻿
﻿
﻿ ﻿ Today was one of the those days on the Chesapeake Bay that you dream about! The reason we get out of bed at 4:30 when nothing else could possible wake us. It's the kind of day you hope you and your buddies have on every trip.

Thanks to Kayak Kevin for all the tips, advice and capturing these great shots!

If you've never seen Kevin's DVD's, please check them out here www.kayakkevin.com.  They're worth every penny and will make you a better fisherman!

At the start of this report I asked - Do you know whats better than being dragged around the Chesapeake Bay by a Bull Red?

Well, there isn't too much that can top that!