It starts out like this… so what do you want to do on your day off? Followed by a slight pause… the answer is pretty obvious – FISH! Where is the only decision left.
This time of year with the bass getting ready to spawn it’s hard to not think about it every minute of the day.
I had a few hours to fish in the morning last week so I called my fishing buddy Richie Bekolay to get his input. I knew he’d just been out chasing bucketmouths the day before with good results.
One code amongst fisherman is when they give you a little intel you never and I mean NEVER give that information away. If you ever had a spot burned then you know exactly what I'm talking about...
With the information I received I quickly made my morning plans to launch at ---------.  The morning started off with winds at 15 and they would be increasing throughout the day so I knew the early bite was going to be my real chance at a big girl. The first fish of the day was a beauty at 21” and 6lbs+. NorthStar Custom Baits jig tipped with a Rage Craw was the ticket on this bass. This bass was caught deep in a laydown in 12' of water. 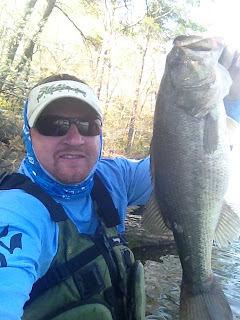 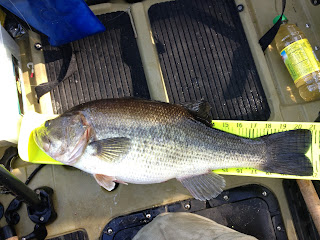 The sun was high enough at this point (9am) to be able to see beds and the bass were there but not willing to bite - yet. I tied on a lighter leader (10lb test) and then I was able to coax these bass into my offerings. I landed quite a few 15”, 16” and 17”+ bass before I had to call it a day. 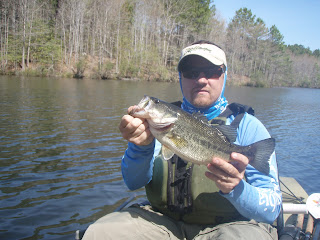 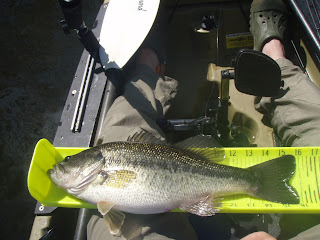 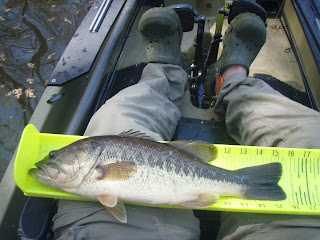 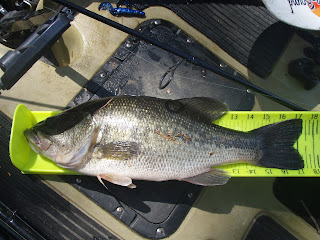 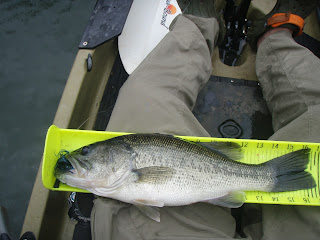 I love this picture of 16" bass with a mouth full of Jig N Craw! It just flat out produces fish... 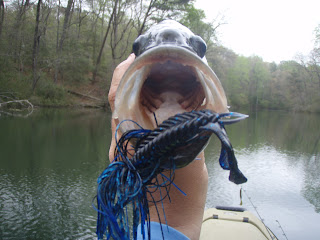 Now the weekend was upon us and I only could fish until 12 or so… I had a pretty good plan to fish a different lake than my earlier trip and decided to give Richie (click on his name to see his report) a call to see what his plans for the day were going be. After a quick discussion he decided to head on up my way. We hit the water early and decided to fish some laydowns and drops offs until the sun was high enough to find some bedding fish. The early going was tough, this really didn’t produce fish like I thought it might but we kept at it like most anglers would. Then I noticed some baitfish busting surface and decided to throw a white double bladed Colorado spinnerbait right in the middle and landed my first fish of the day. Little guy maybe 12” or so… (good tip here - have plenty of rods rigged and ready) then landed another little guy about the same size.
I then decided to toss out the Northstar Custom Baits Jig and Rage Craw. I did some research and most Pro's say that 70% of the time (or more) a bass hits a jig on the first fall. This was exactly the case on this fish, right as the bait was falling I felt that little thump. Yeah you know what I'm talking about - thats when you reel in fast and try to get a good hookset before he knows your offering is about put a whoopin' on his jaw. He put up a real nice fight for an 18” bass.
Here's a great sequence of pictures of this fish...

I landed 6 largemouth and before I knew it the time to head home had come. It’s tough to leave when the fish are biting but the wife had plans and I didn’t want to be late.
Richie went for round 2 - see the rest of his day here http://www.hookline-sinker.net/
This time of year is an exciting time to be a bass fishing. Before long the saltwater reports will be starting to show up on websites and blogs and the bass will be long forgotten. Until the next trip.
Be safe on the water and enjoy every minute!
HOOKED UP

Posted by Joe Underwood at 8:40 PM